The Drowned, The Saved and The Forgotten

Genocide Survivors and The Foundations Of Modern Humanitarianism 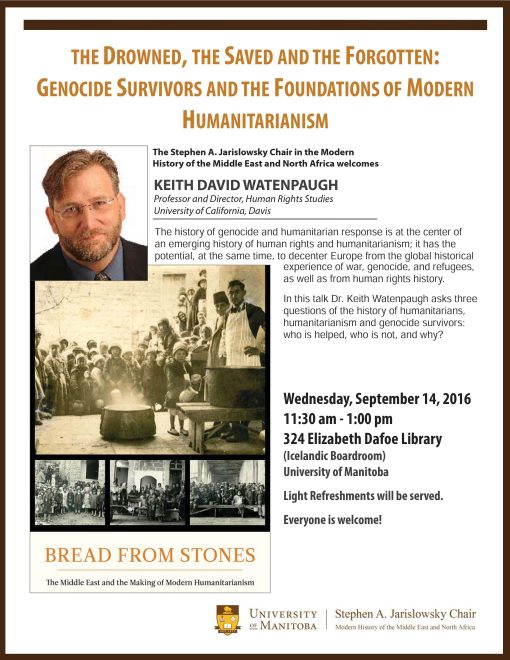 In this talk Dr. Keith Watenpaugh asked three questions of the history of humanitarians, humanitarianism and genocide survivors: who is helped, who is not, and why?

In the aftermath of World War I, waves of displaced persons and new political borders forced the international community, embodied in the League of Nations, to first define and then manage novel iterations of the “refugee” and the “minority.” Postwar efforts to interdict trafficking in women and children in the region mobilized humanitarian organizations and groups in Europe and the Americas to a degree not seen since the abolitionist movement of the 19th century. The sheer scale of interwar relief needs prompted the replacement of independent missionary-based charity with secular, professional, and bureaucratized intergovernmental forms of aid and development, in particular American Near East Relief, which continues its work today as the Near East Foundation. The Armenian Genocide and its aftermath was critical to the formation of international humanitarian and human rights law and laid the groundwork for the Convention on the Prevention and Punishment of the Crime of Genocide (1948). Its official denial by a modern nation-state has been a catalyst for critical discussions about hate speech, contemporary forms of discrimination, and the complicity of the academy in promoting denial. Consequently, the history of genocide and humanitarian response is at the center of an emerging history of human rights and humanitarianism; it has the potential, at the same time, to decenter Europe from the global historical experience of war, genocide, and refugees, as well as from human rights history.