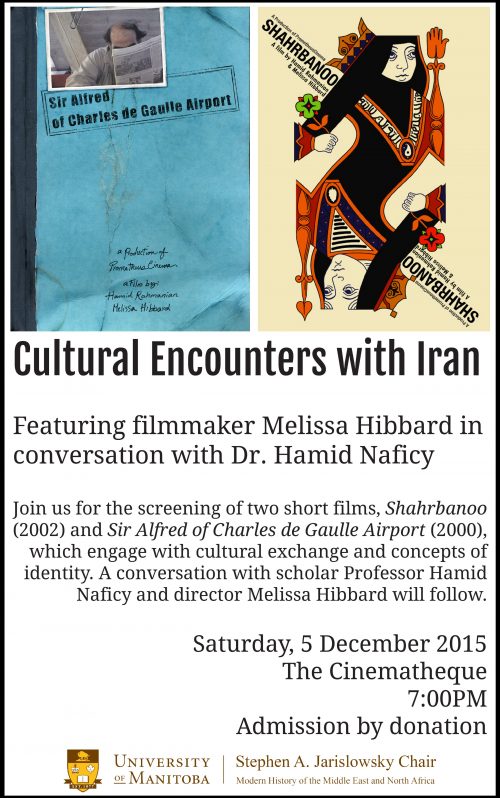 Two films by directors Hamid Rahmanian and Melissa Hibbard were screened, followed by a conversation between Dr. Hamid Naficy and Dr. Jennifer Dueck.

Shahrbanoo is an unlikely story. The encounter of an American woman with a super-conservative Iranian family living in one of the poorest neighborhoods of Tehran was surely not an accident waiting to happen. But this is not a movie about politics. It is a heart-warming, alternatively hilarious, harrowing and heartrending, testimony to the hidden ties that connect us across vast cultural gulfs. The centerpiece of the story is Melissa who was visiting her new husband’s family in Tehran last autumn. She was befriended by Shahrbanoo who has been moonlighting as her mother-in-law’s housekeeper for more than a quarter of a century without the knowledge of her own family. Shahrbanoo invites Melissa – and her husband with his ever-present camera in tow – to a family gathering where she is treated to an intense cultural exchange about subjects ranging from women’s place in society to American foreign policy. Shahrbanoo (2002) premiered on the PBS station WNET where it received among the highest ratings for an independently produced documentary.

See the real story that inspired The Terminal, directed by Steven Spielberg. Mehran Karemi Nasseri, who now goes by the name “Sir Alfred”, has been living in the Charles de Gaulle Airport in Paris, France. For the past twelve years he has been waiting for the document that would allow him to leave. Unlike the story that has been told in the world press of a man trapped in the underground terminals of an airport, dubbed the “strangest case in immigration history,” this documentary examines the life of a man whose only aspiration is to be somebody else.